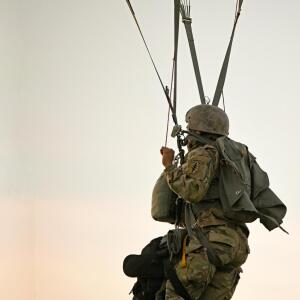 He was born July 30, 1946 in La Porte, Indiana, the son of Lee Franklin "Duke" Masterson and Adalene Juanita (Skelton) Masterson‑McDonald.

Doug was a lifelong resident of the area except for his time spent in the military, where he served in the United States Army as a 1st Sergeant until his retirement in 1987. During that career, Doug, a highly skilled combat engineer, was a paratrooper and a drill sergeant. He served tours of duty in Germany, Viet Nam, S. Africa and Korea, to name a few. He began a second career as a carpenter with La Porte Carpenter's Union local 1485. Doug was a Mason in both La Porte and Kingsbury, a Shriner, and a past commander of the Veterans of Foreign Wars Rolling Prairie Post 9423. He was an avid fisherman and motorcyclist. Once a year he rode with the Patriot Guard for a fundraiser to Lafayette. In earlier years, he and his brother Frank used to hunt together but more recently just sat outside enjoying nature with Doug's beloved Bichon, Sneezer, by his side.

Arrangements are being entrusted to Haverstock Funeral Home and Cremation Services, 602 Maple Ave., La Porte, IN where the family will receive friends on Monday, June 14, 2021 from 11 a.m. to 1 p.m., followed by a Celebration of Life Service, with Pastor Dennis Meyer, officiating. Both a masonic service and military honors will be included. Cremation will take place.

Memorial contributions may be made to the Shriner's Children's Hospital, 2211 N. Oak Park Ave., Chicago, IL 60707.

To send flowers to the family or plant a tree in memory of Douglas, please visit our floral store.

You can still show your support by sending flowers directly to the family, or by planting a memorial tree in the memory of Douglas Masterson
Share a memory
© 2021 Haverstock Funeral Home. All Rights Reserved. Funeral Home website by CFS & TA | Terms of Use | Privacy Policy